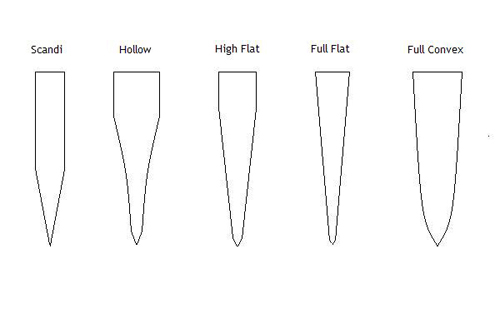 Today I would like to talk about the most common tactical knife edge grind types that you are likely to see and encounter when buying a knife.

The knife edge grinds types depicted above are the most common on the market today and you are likely to have seen some or most of them and maybe not have know it. Regardless, I will explain each one so that you will have a good foundation of best tactical knife blade grind types when we’re done.

The Scandinavian tactical knife grind is just about the simplest knife grind there is to understand and also, in my opinion, the easiest blade type to sharpen, especially for those who do not have a lot of sharpening experience or knowledge.

In the world of knife sharpening there are lots of confusing terms like primary edge and secondary edge, or primary and secondary grinds or even the infamous back bevel and then primary edge. This terminology can get confusing for many people. Hence, the Scandinavian tactical knife grinds.

It is the simplest of knife grinds because there is no primary edge and then a secondary edge, or back bevel and primary edge as some would say. A knife produced with the Scandinavian grind only has one grind. Take a look at the image shown below: 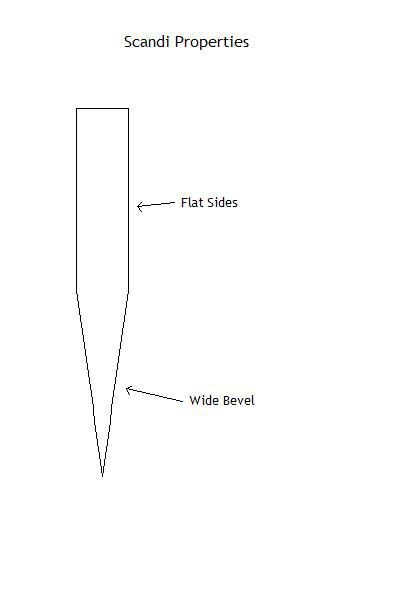 The Scandinavian tactical blade grind is generally set at around twenty-five degrees or twelve points five degrees per side of the blade although this can vary slightly depending on the maker/producer of the Scandinavian grind type knife. Many American makers are starting to produce “Scandi” ground blades these days for ease of use and re-sharpening.

The Scandinavian ground blade is a great blade that I highly recommend for beginning and intermediate woodsmen and campers alike. One of the best features of this type of knife grind is the width of the grind itself which lends itself to being easily re-sharpened. Other types of knife grinds with a thinner profile can actually be harder to sharpen/re-sharpen in the field as it might be difficult to determine the correct angle to reshape the knife with.

Being that it is so wide of an angle you just take the Scandi-ground knife and lay it flat on the stone or sharpening medium of your choice and then take your finger and press the blade (the primary cutting edge) down against the stone which will elevate the spine of the blade and… there you have it the correct angle in which to re-sharpen a Scandinavian ground knife!

If you look at a Scandinavian ground knife you will see that it looks very much like the edge of a samurai sword or even like the grind of a Japanese sushi knife. Both the samurai sword and the sushi knife are what is known as “zero grind” knives. By this, I mean that there is no secondary bevel that has been created on the Scandi grind. So for all intents and purposes, the Scandinavian ground knife is a “zero ground” blade.

Now, there are times where one might hear this argument about the Scandi ground knife and it goes like this: Some people may tell you that over time and over many sharpenings that the grind itself may become convex in nature. This has never happened to me and I have carried and used Martini and Isaaki Finnish Puukko knives in the field for years and have never had the problem of the blade going convex on mine.

Any “convexation” or form of “wire edge” above the main grind that would occur should and would be “lopped” off of the blade when properly resharpened. Take my word for it, the Scandinavian ground knife is a must have for any  outdoorsman at any skill level.

The tactical hollow ground knife blade style is one that many people have seen and may not have realized that it is a hollow ground knife. It is one of the most common types of knife grinds available today. You may have seen it on a standard Buck 110 folding hunter as this knife is very popular and has been around for years and years.

The hollow grind utilizes a profile that is concave in nature for the main grind of the knife blade (see image below). In my humble life and experience with knives, most if not all hollow ground tactical knives that I have seen have a secondary bevel that leads to a primary cutting edge. This is commonly referred to as a V grind. 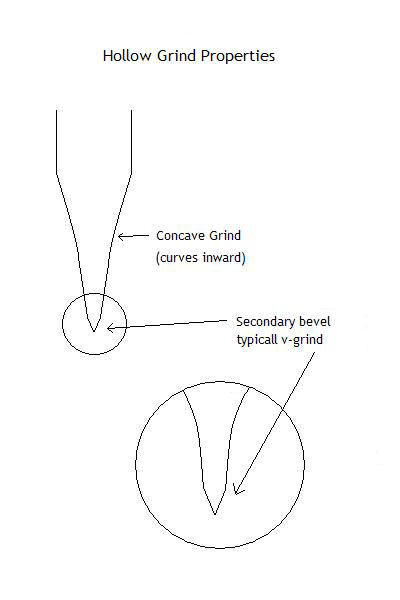 Now, in many eyes the hollow grind style of blade making is considered to be a “weak” knife grind because of the fact that as you follow the grind from the beginning of the following process to the cutting edge of the blade it gets thinner and thinner the closer you get to the primary cutting edge.

Well, this is a good thing in my humble opinion as this type of blade grind lends itself to excellent skinning capabilities and if sharpened correctly is just a good all around cutting edge type of grind.

Now, like I said some people might find that a hollow ground knife is weak as there is less metal toward the primary cutting edge, but that is preferable in some cases. In my opinion, the hollow grind, if done right, is excellent blade geometry for cutting chores of all types and because the blade is thinner towards the primary cutting edge, if you utilize the proper sharpening stone or other sharpening apparatus then re-sharpening should be a breeze too.

The full convex knife grind is the opposite of the hollow grind tactical knife type. If you look at a knife blade that is ground in the convex style you will be hard pressed to find a level of any type of the blade. In many cases you could even say that it looks like a “zero grind” or even a fat “Scandinavian grind” but it is a convex grind. (see image below): 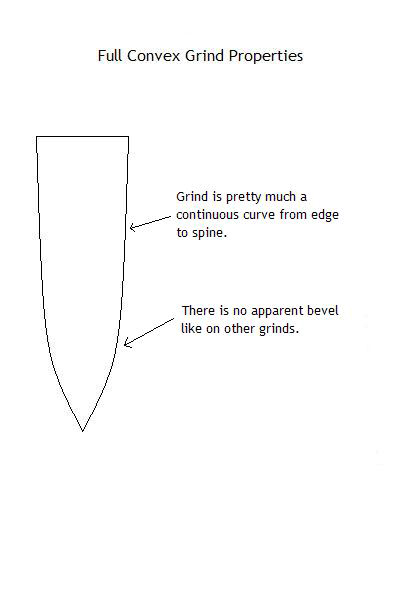 The convex knife grind utilizes a continuous curve that starts at the spine of the blade and goes all the way down to the primary cutting edge of this blade grind type. 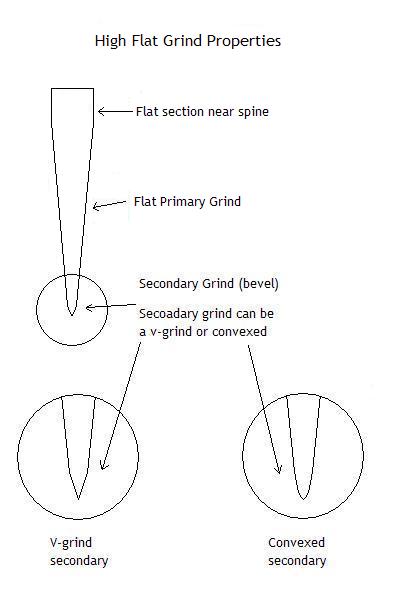 Now, there are times when things can get a bit confusing with it comes to flat ground knives. The issue of confusion is the secondary bevel of the flat ground knife. The secondary bevel can be a “V” grind or a convex grind or even some form of a compound knife grind which is merely a grind of multiple angles of a “V” grind that looks a lot like a convex grind and is a grind type that most people who carry knives on a daily basis will not use or see in most production and custom folders or tactical fixed blade knife.

There are issues with this type of blade grind as lots of folks will get confused when some guy will say that they have put a convex edge on the blade that they are using at the time. Well, this is just a matter of proper knife grind education as it is just about impossible to put a convex grind on a high flat ground tactical knife. It would take a miracle to accomplish and I have not seen miracles of this kind in thirty years of being in the cutlery business.

What many of these guys are talking about is actually putting a secondary bevel on a convex blade grind which, in my humble opinion and to be nice, is not what you are supposed to do with a convex grind. It is convex, so leave it convex.

The full flat tactical knife grind is similar to a high flat knife grind type and the only difference is that the flat ground knife blade type has a grind that is ground all the way to the top of the spine of the blade (see image below). This knife grind type has no flat portion of the blade nearest to the spine. The full flat ground tactical blade type utilizes a grind that is a single linear point from the spine of the blade all the way down to the secondary bevel of the knife. This secondary beveling can be of many types, such as “V” grinds and convex or compound just as with the high flat grind: 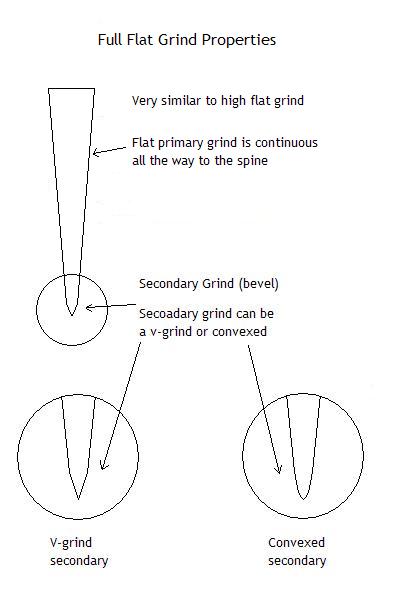 So there you have it, folks, the basic knife grinds employed today by most production and custom knife makers alike.

There are even more types of knife grinds available out there and many of them I will not detail here as they are employed in industrial uses and some others are used in certain types of arts and crafts.

What we have covered, however, should clear up knife edges for the everyday guy or gal who carries a pocket knife or fixed blade knife, or perhaps for the average knife collector. Please feel free to leave a comment.

Fixed blade knife is always prepared to use at any time. You don’t need to fold or unfold it. You can deploy this tool faster. Just draw the knife and complete the purpose of it. You can chop anything easily with the sharp edge of the fixed knife.

Thanks for the info! Thanks also to the first responder. I appreciate it for clarification. Great article!

Correction; … *2nd responder. The first is obviously an unhappy/ ungrateful person. I hope things get better for him/her.

Thanks for the info! Thanks also to the first responder. I appreciate it for clarification. Great article!

That’s a great write up on knife bevels, I’m a knife maker and use all grinds listed. The hollow grind can get a bad rap as a chopper when used on thin steel or sub standard steel, theres also a different radius of the hollow grind depending on the wheel size which determines the depth of the concave. A 12 or 14 wheel will be almost like that of a flat grind, flat grinds take a lot of weight off the blade for chopping, I’m not particularly fond of a lightweight blade on a chopper. Using 3/16 or 1/4 thick CPM3V with a proper hollow grind will work fine for chopping and outperforms any 10XX. Certain grinds for certain applications, a knife is a tool choose the proper tool for the job (grind, steel, size and weight).