The other day my kid was feeling sick with sinus pressure so I went looking for some Children’s Mucinex and, while I had two bottles, they had apparently “expired” about three years ago.

Now, normally I wouldn’t pay too much attention to expiration dates but since it was a liquid medication (they tend to go bad faster than tablets, for example) and since it was my kid I was giving this to, I decided to toss the Mucinex and go get some more.

The point, however, was that I started to look at the various first aid supplies and medications I keep in my basic first aid kit and it must have been a while since I’d looked at this stuff because I was quite surprised when I found that the vast majority of the supplies I’d had on hand were technically expired. 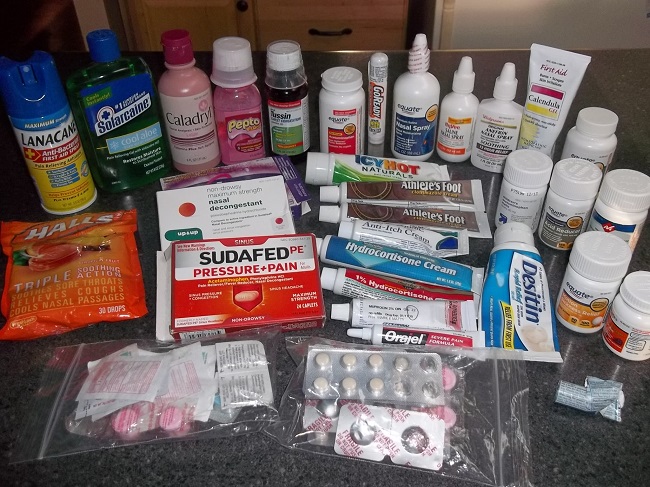 There are dozens of different medications here, as well as some duplicates, all of which are technically expired. Granted, some are only recently expired (dates from early this year or late last year) but I did find a few items that had expiration dates of 2009. 😉

Like I eluded to above, I’m not terribly concerned about some of the tablets and pills but there are quite a few ointments, gels, and other liquids that probably need replaced for sure.

In my defense, I used to keep a spreadsheet on my computer which I updated regularly with expiration dates but I had trouble with my PC a while back and lost some files (or at least didn’t keep them backed up like I should have) and ended up “giving up” on keeping track of my first aid supplies thinking that I would just replace stuff as needed… yeah, that didn’t quite work out as anticipated.

In fact, I think I actually had MORE supplies which need replaced than not! Moreover, this isn’t even counting the several items not pictured above which didn’t have expiration dates but probably need replaced too.

So, here I am on Saturday morning making a huge first aid supplies shopping list. Good thing this wasn’t SHTF… yet.

The takeaway: check your first aid supplies and make a list of expiration dates or, at least, put in on the calendar to check them once a year, which I’ve just done myself.

3 replies on “Check Your First Aid Supplies Lately? I Just Did And I Was Shocked At My Failure…”

I put storage items (pills) in a bag and seal them. I then put them in a mason jar and seal that. I think it helps. It also makes more room if I take them out of the box or bottle. it is time, however to get rid of some of them.

I see 3 nasal sprays, but no eye drops of any kind. You really should have a bottle of Visine and also a bottle (or box of viles) of preservative free drops as well.

Yes, that’s because I had 3 bottles of expired nasal spray but my eye drops were expired… this photo is of all that I had which was expired.