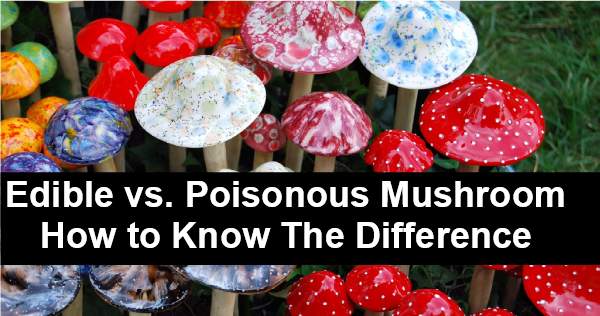 Mushrooms are one of the most striking and intriguing vegetation in the world – highly regarded for their nutrient composition. All mushroom varieties are characterized by beautiful forms and shapes. Though some have medicinal properties, others are poisonous and lethal.

Picking of mushrooms is steadily becoming a hobby for many people, often for food but also for recreation. We hope that this course will guide you in taking up this activity too.

[Editor’s note: Please consult a local knowledgeable expert and/or guidebook before attempting mushroom picking! You health and safety are nothing to be taken lightly as choosing the wrong mushroom can be potentially lethal.]

People normally have diverse reactions to the foods they ingest – this fact holds true for mushroom consumption. What may be edible for some people may not be necessarily edible to everyone. North America is known to be home to approximately 250 mushroom species. Edible mushrooms are those that pose no health issues whatsoever when consumed.

The safest way to identify edible from poisonous mushrooms is via accurate verification of their specie by an expert collector. Though books are an acceptable alternative means towards identification of edible mushroom species, it can occasionally prove catastrophic. Empirical identification methods such as smell and taste can be extremely dangerous as some poisonous mushrooms could exhibit a pleasant smell and taste.

Poisonous mushroom species are those that cause health complications when ingested. Their mere resemblance to edible mushroom varieties has in numerous occasions confused mushroom collectors. In some cases an unwitting victim does not exhibit symptoms of poisoning immediately after consumption, but often shows up after 48 hours. Symptom severity, however, varies from case to case.

Poisonous mushrooms can lead to death within 3 to 6 days after ingestion. As such, it is very important that the victim seek medical attention immediately. Mushroom poisoning symptoms include dizziness, breathing problems, diarrhea, vomiting and dehydration. Some of the most poisonous mushroom species include the death cap mushroom, Amanita phalloides, Amanita virosa (the destroying angel), Amanita muscaria (the fly Agaric) and Cortinariusrubellus.

Identification of the different mushroom species

There exist numerous methods for the identification of mushrooms and all methods should be employed when out foraging. The criteria include:

Remember to always confirm with various pictures and guides as mushrooms can appear different in regard to their age, the locale they grow, as well as the type of climate they grow in.

Difference between Toadstools and Edible Mushrooms

Although some varieties of mushrooms out there are edible, others are highly poisonous and lethal; however, there exist no hard and fast rules or test through which one can safely discern the poisonous varieties other than accurate identification of the species.

Most people are familiar with the common mushroom varieties since these are the edible mushrooms that are readily available for purchase at the supermarket and grocery. You may not necessarily go out looking for mushrooms in the wild, but many people are known to identify, collect and ingest wild mushrooms. Again, only people with appropriate knowledge and training in mushroom identification should collect and consume mushrooms from the wild.

There are so many factors one need to take into consideration when trying to identify mushrooms in the wild. In this guide, we will go through mushroom identification process regarding their habitat, spores, gills and much more.

Typically, physical characteristics (such as color and shape) are the first attributes one will notice. Upon successful examination of these mushroom traits, the identification process becomes much easier and usually straightforward.

The main difference between the edible and toadstool mushrooms is the toxins present in the latter. These toxins are naturally produced by the fungi, and no known mechanism of toxic removal, including cooking, canning or freezing work for mushroom toxins.

Mushroom toxins are usually sub-divided into four broad categories including.

Where does the mushroom grow? Is it growing on trees or grassland? What kind of tree are they growing atop or under? Are they growing in a ring or singly, tuft or troop?

Edible mushrooms typically grow in lawns or open paddocks and not under shrubs or trees like the toadstool varieties. Amanitas, for example, start appearing in fall and summer, especially on the floor of woodlands. They are quite common in most places.

The following is a detailed list of some of the common physical characteristics that distinguish edible mushrooms from poisonous ones:

These are universal veil’s remnants that encompass the mushroom while it is young. Sometimes these patches look more like rows of raised dots.

Edible mushrooms have smooth and more or less white caps with no visible or noticeable raised warts or scales. On the contrary, poisonous mushrooms, for instance, the toxic fly agaric have a different colored cap (usually red with white spots) which has conspicuous scales and raised lumps.

Most of the edible mushrooms have bun-shaped or convex caps and sometimes with a wide low-hump. Other edible mushrooms such as chanterelles have caps that are concave and wavy or even trumpet-shaped. Poisonous species, however, have convex caps while young and flattens as the mushroom matures.

The cap of many edible mushrooms stretches from the stem as it grows developing a ring of tissue around the stem also known as the annulus. Toadstools or poisonous varieties do not have this ring around the stem.

Some mushrooms have a rounded cup commonly referred to as the “volva”, which is a universal veil remnant. To observe the swollen base clearly you may have to dig up the mushroom as it’s usually under the ground.

The base of the stem of edible mushrooms is narrow or not thick like the rest of the stalk. On the other hand, many poisonous mushrooms usually have a noticeably swollen base. The Amanita muscaria, for instance, has a bulbous base.

A spore print is an important diagnostic trait for identifying mushrooms. Identifying the color of the spore print can be very helpful as it helps you distinguish the different mushroom varieties. The color of mushroom spore can range from white to black and many other shades depending on the mushroom species. Some of the common poisonous mushrooms such as Amanita have white-colored spore prints.

You can easily obtain a spore print for color-testing by removing the stem and putting the mushroom gills on a dark or white piece of paper for several hours. Once you know the color of the spore refer to a mushroom guide to know the exact species and its edibility.

The gills on the cap of a young edible mushroom cap are usually pink in colour. However, the pink colour changes as the mushroom mature to brown or black. On the contrary, poisonous mushrooms have white gills that do not change colour throughout their entire lifecycle.

Another common difference between poisonous and edible mushrooms is their smell. Some mushrooms have distinct smells or a unique smell which can help you to distinguish species that are visually similar. Some of the edible mushrooms, for instance, the Chanterelles have a distinctive fruity smell like apricots. Some of the poisonous species such as Agaricus xanthodermus, commonly known as the yellow-staining mushroom are known for their almond scent.

When you are testing for odors, crush a part of the mushroom’s cap for best results. Many mushrooms lack a smell, while others have quite a distinctive odor; thus, make sure you have a local mushroom guidebook to cross-reference.

Also, you need to keep in mind that not all mushrooms with odors give a certain smell of something as most of them have vague descriptions like “farinaceous,” meaning consisting of or containing starch.

How to Avoid Poisoning

To prevent mushroom poisoning you must be knowledgeable in the various mushroom identification methods when collecting mushrooms.

Remember that there is no simple cut-and-dry method or set identifiable features to distinguish poisonous mushrooms from edible ones; thus, once you collect mushrooms, never mix the two species, and only consume the edible mushrooms that are healthy and in good condition.

Always preserve your edible mushrooms by properly refrigerating them, and discard any mushroom you are in doubt about whether it is edible or non-edible.

Although there are numerous poisonous species, knowing how to properly identify the various mushrooms species will help to keep you from getting sick and even to enjoy your new mushroom foraging hobby.

There are numerous mushroom species and knowing the difference between poisonous and edible mushrooms can be a daunting task. Some mushrooms are edible and delicious, while others will give you a nasty tummy upset… maybe even lead to death. Please equip yourself with the right information and always take proper precautions when you are on the lookout for edible mushrooms.

Last, never taste a mushroom to identify whether it’s poisonous or edible because some poisonous species taste good, yet they’re deadly. Instead, remember to check on the unique physical characteristics, smell, and the habitat in which the mushroom grows to establish whether it’s safe for consumption or not.

Author Bio: Hi there, I am Jason Shiflet from HuntingPleasures.com – a website help people exchange knowledge about hunting pleasures!

4 replies on “Edible vs Poisonous Mushrooms – What Is The Difference?”

Mushroom is a vegetable originated from Europe. Most of the Italian and Mexican food contains mushrooms like pizza, pasta, salad because of which it becomes more tasty and delicious. There are a lot of varieties of mushrooms of which some we can eat and some are poisonous. All of them look similar so it gives hard time to know which of them is edible. There are some ways to identify that which are given in the video.
https://www.youtube.com/watch?v=TueCW8B2Lcw

I love to follow this place, you are always good for update idea, thanks

MUSHROOMS ARE FUNGI NOT VEGETATION!!!!!

You ask, Edible vs Poisonous Mushrooms – What Is The Difference?
Uh, one’s edible and the other poisonous.
A flip answer? Yes, however during a course on mycology (study of fungus), the prof said that even the pros make mistakes in identification.
Mushrooms are eaten mostly for flavor and contain small amounts of minor nutrients. If you are scavenging to survive, avoid mushrooms. It’s not worth getting really sick or dying from eating them. Best advice: Stick to cultured mushrooms.