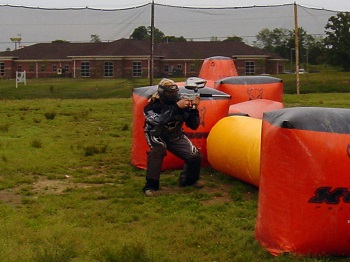 This past weekend I had the opportunity to play a few hours of paintball with some friends and family at a nearby facility for my son’s recent birthday. None of us had ever been before and I can honestly say it was an eye-opening experience. Apparently, there are some people who take this VERY seriously. And, like the title says, if paintball is anything like what I might see in a real life firefight, I really am in big trouble.

As I’ve mentioned in the past, I’ve never served in the military or law enforcement and therefore don’t have any tactical combat training or experience. Of course, I should first mention that I can see how paintball might differ significantly from a real-life scenario but it’s likely the closest any average Joe (like me) is going to get and still live to talk about it.

In particular, I was surprised at how quickly the pace of the game could change, at how much difference experienced players made, and how easy it was to get shot! Over the course of several games I managed to get shot in the leg multiple times, square in the chest once or twice, the shoulder, and once in the head. The sad part is that it was my own teammate that shot me in the head. Even worse, I’m almost positive it was my own kid or his friend. 🙁

Now, I noticed that some of the better players tended to rush up quickly whereas I preferred to hang back… just delaying my inevitable demise as it were. And, obviously, sometimes these rushing players got shot early on but most of the time they wrecked havoc. In a real-life situation I doubt we would see such bravado. I also noticed quite a bit of teamwork among the better players, including hand signals and what seemed like understood strategies… it seems they’ve done this a lot. This drove home how important it would be to learn to work together with others you expect to survive with so you act like a unit and not all chaotic as most of us were. I’m sure this makes sense but it’s one thing to talk about strategy and yet another to actually do it.

Like I mentioned above, paintball has it’s flaws as a training tool. For one you’re confined to a field with set boundaries. In addition, there’s nothing to be said for “home field advantage” in that you know your home and surroundings whereas an attacking group would not. Similarly, there are no early warning devices to alert you of an attack nor the element of surprise from being attacked. And, needless to say, you get to walk away when you’re shot… minus a little pride.

Regardless of the downsides, I can’t think of any other potential training tool that the average person (or group) might utilize to bring cohesion, work strategy, and even get some small inkling of what it might feel like to be shot at, though, I couldn’t imagine being shot at for real! Those of you who have done–and still do–so in defense of our country, I can only say “thank you” from the depths of my heart and soul as I’m positive it takes a truly special person to put themselves in harms way day-in and day-out. God bless you all.

6 replies on “Holy Crap! If Paintball is ANYTHING Like a Real Life Gun Fight, I’m Screwed!!”

I have a few friends who really take it seriously and even bought their own ammo and camos, too! They move like soldiers with fantastic precision and I just stood there watching in amazement!

Good article and your experience was similar to mine. I’ve done paintball only once but tried to approach it as a learning experience. I posted about it here.

T.R. – I am guessing you have never played airsoft with guns that shoot over 400 fps. They hurt….a lot.

Yes, but paintballs travel at around 300fps and normally you are getting shot in close quarters. Even though they are slower, a .68 caliber ball filled with paint hurts a bit more than a 6mm plastic bb, just because it hits more skin. I’ve been shot by both many times, and thats my 2 cents on the issue.

I think paintball has its benefits as a training tool. Cover and movement and the awareness that if you do not keep track of your opponents whereabouts you will get hurt (paintballs and hurt A LOT). Every time I play I get shot. A Navy SEAL could go play and they will loose against experienced opponents. Now – take an entire Navy SEAL team and allow them to develop a strategy – they will likely win every time.

Professional paintball teams have a plan for every match. They are constantly communicating and are ultra-familiar with the course/field. I go up against amateurs all the time that play with a couple people frequently and have the communication down pat and know the field better than I – and win.

Regardless – there are benefits.

As far as better training goes – airsoft beats paintball. The distances and weapons are more realistic.