I had fun making the water bottle survival kit a few weeks back and I thought I would try one more time. This time I choose to use an old Sawyer Water Filter bottle (here’s a link to the newer version) such as this one 0n the left (as compared to the 16-ounce bottle from last time): 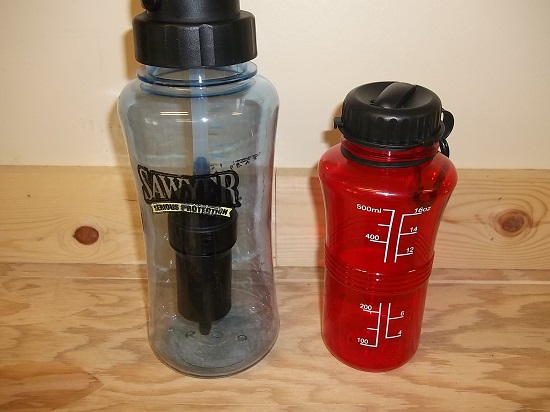 Obviously, the Sawyer bottle is much larger (at 32-ounces if I remember right). As such, I should be able to get a lot more in there but there’s one big problem: the giant water filter element in the middle! Well, it’s kind of necessary since that’s the actual water filter so it must stay. Working around the filter element, here’s what I shoved inside: 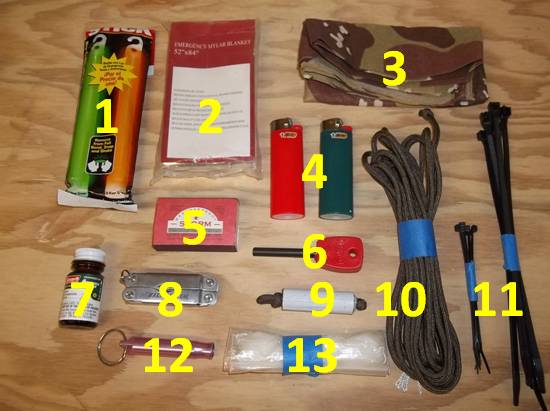 In no particular order:

Unlike last time, I didn’t bother with including the Streamlight Nano flashlight (and mini USB drive) in the photo here but they are so small it wouldn’t have been a problem to add them. Also, because this water bottle had a water filter built in there was no need to include the McNett Frontier Water Filter Straw from last time.

Again, most of the basics are covered, from fire-starting to water and some gear. I like the addition of paracord, in particular, and I’d imagine somebody, somewhere, likes the mylar blanket. After thinking about it, I probably could have spent some time and wrapped the cord around the outside of the bottle thereby saving space but I wasn’t feeling THAT ambitious. 😉

Like last time, I could have easily included other items such as a needle and some thread, safety pins, small fishing line, a compact compass and whatnot, among other small items since they could fill the cracks and crevasses.

Ultimately, these things are always a work in progress. And that is the real beauty of making your own survival kits: you can add precisely what you want so it fits YOUR needs.

Last, remember that a small survival kit like this is great for adding to a backpack, briefcase, or wherever you like since it won’t take up much room at all.

I think the water bottle emergency kits are a great idea and are an easy sell for those people who do not want to appear crazy or paranoid or something like that. as you said they do not take up a lot of space and are very mobile . I am curious, however, as to why you have so many fire starting message in a water bottle kit . it is obviously just my opinion, and I know that these are always a work in progress, but I think removing your firestarter and box of matches would free up a lot of room , she should maybe to the point that you could put another or even a full-size multitool in there. and going along the same lines as you were talking about with the pair cord, you could wrap some duct tape around the lighter to save even more space. for that matter, those Bic lighters last for ever so you can save space by going with the smaller lighters. I would also recommend some freezer style zip lock bags to include in there both sandwich size and quart size. if you are in a situation in which you need this stuff, chances are that you will need some way to hold onto and even store things you come along, along the way. if for example, you came across wild edibles of any sort , you could use a back to hold onto these. they are also beneficial to pull water from the water source off of the area below the surface . That will eliminate a lot of floating type things from having to be filtered or cleaned out of your water. You might also want to consider including a tube Or two of crazy glue. This can be your most field Expedient first aid kit. that stuff is great for ceiling wounds as well as mending things that might need to be mended. and it really does not take much room. again, for what it’s worth, these are all just my opinion .

No doubt there are infinite possibilities with a small kit like this and the ability to do what makes sense to you is the entire point. Why so many fire starting implements? Probably just because I could easily add them but, beyond that, fire starting is a crucial aspect of survival. I’d hate to have included only matches to find that they’re just too old to start a fire or to have included only a lighter to find that this one leaked or evaporated or whatever. Anyway, I do like the idea of including Ziploc bags in the container for the very reasons you cite. After all, they’ll take up almost no room whatsoever. Beyond that, I can see that I failed to include anything like bandages and such, thanks for the thought. Again, it’s really just a huge work in progress!!

I bought a bunch of these! They are a great starting point in building a larger Get Home Bag. The bottles that I kept were slightly modified to fit personal needs. I gave a few away as gifts, mainly for close friends that won’t do any crisis/disaster preparing on their own. CH Kadels sold 2 different types, one was $23.99 and the other $12.99. The more expensive models can be purchased at Cabelas, too. I will copy and paste the contents from the listing that itemizes my Ruger 10/22 Takedown Survival Kit: SURVIVAL CANTEEN – Containing: 10 band-aids, whistle/compass, flashlight with AA batteries, space blanket, poncho, mini pocket knife and a box of waterproof matches.