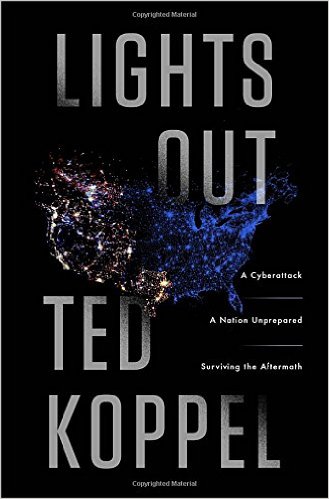 I was sent the book Lights Out: A Cyberattack, A Nation Unprepared, Surviving the Aftermath by Ted Koppel to review.

Seeing as though it’s a subject I recently researched myself, I jumped at the chance… and I wasn’t disappointed.

I can say that I was pleasantly surprised to see a well-respected journalist tackling a “fringe” topic such as a cyberattack and ultimately preparedness as well. Perhaps the world is waking up to the stark reality we live in but it will take more than a book to wake up the nation… it WILL take a major attack.

Ok, so how about the book?

The book, as you might have rightfully guessed, is about the potential threat of a cyberattack on our nation’s power grid, a threat that few American’s, let alone our government, take seriously.

Ted Koppel does a fine job of making the case for getting prepared for just such an event and I do hope you take the time to read his book.

For starters, the book is divided into three distinct sections: A Cyberattack, A Nation Unprepared, and Surviving the Aftermath.

We’ll take them one by one…

The first section is, in my opinion, by far the most important to read if you want to understand the scope and gravity of the threat of cyberattack.

This is where Koppel discusses just how vulnerable our nation’s power grid is, where the weakest links in the system are, the players involved (from generating power to final distribution), who might be most willing and able to attack, and how they might do so.

Though I realized we were vulnerable from my own research, I didn’t fully understand the intricacies… the “nuts and bolts” if you will of how we could be attacked. I actually learned quite a bit about how our power grid is vulnerable from his in-depth explanations and I was thankful for the time he took to cover it all.

In these chapters Koppel explains just how insane (my description) things really are.

For example, he points out that at a Black Hat hackers conference in 2011, one hacker managed to break the Siemens “super secret” password they use to gain entry to each of their thousands of SCADA software deployments (what most of the power stations are run on) with ease. Siemens had to go around and change the password on EVERY installation as a result.

Using the same password is so 2005! Gee, I wonder how secure this software still is only a few years later? If they’re still using ONE password… not very secure I can assure you.

He discusses how there’s an ever-increasing need for government regulation to better secure the grid but is often met by a constant push-back from industry to be free of regulation, driven, of course, by profit motives which are apparently quite thin for smaller power companies and precisely the reason why many of these smaller facilities are the most vulnerable to cyberattack. He actually spends quite a bit of time on this topic, one that I don’t feel will ever be answered to anyone’s satisfaction, let alone America’s need to secure the grid.

In this section, Koppel also talks about the odds of an attack, provides examples of how cyberattacks have taken place in the past (there are many), as well as who has the capability and motive to attack us. If one stops to consider just how easy it might be for a rogue hacker group (say from Russia or China) to disable at least a major portion of the grid should they put their minds to it… most would choose to get prepared in short order.

In this relatively short second section, Koppel interviews folks from two main organizations: FEMA and the Red Cross. It was actually quite interesting to read their responses to the potential for a nationwide power failure and, honestly, I kept expecting more concrete answers but never got one.

As Koppel continued to press the issue, basically saying “what would YOUR organization do if we had a nation-wide grid failure?” their answers were lacking to say the least.

Ultimately they don’t have a viable plan for a national response. In fairness, how could they?

Government and relief organizations have shown time and again that they cannot fully respond to regional disasters appropriately… a national disaster on the scale that a cyberattack would bring is many times more challenging than anything they’ve faced thus far… it’s a lose/lose situation for any agency expected to respond to such a catastrophe and Koppel makes it clear we don’t have a plan as a nation.

I was hoping to find chapter after chapter of advice as to what YOU, as an individual, can and should do to better prepare yourself for just such a threat. That wasn’t the case.

Disappointed as I was, this section was still an interesting read as Koppel reported on the various juxtapositions of cultures between, say, folks living in a big city such as New York versus a small town in Wyoming. He asked how prepared each area might be for such a calamity (as if that’s not obvious), what folks might do if pressed to either evacuate or take in refugees (a currently appropriate topic), and how both agencies and individuals might respond during a cyberattack.

Beyond that, Kopppel also dives headfirst into the world of preparedness, generally painting us preppers in a favorable light, which was nice to hear.

He visits a few preparedness expos and gets a taste of the costs involved in prepping and quickly realized there’s some profits to be made there. 🙂 He also visits a few families who have taken their prepping to another level than most of us (think Doomsday Preppers), talks with folks who consider self-reliance a way of life, and actually spends quite a bit of time discussing the Mormons’ philosophy on preparedness… if only every major religion would follow their lead.

Ultimately, in his book Lights Out, Koppel keeps looking for a national answer to the threat of a cyberattack which is, of course, a big part of the solution but never quite hits home with what you and I should do prepare ourselves for an attack.

That’s ok, though. Preparing you and your family is my job (one I’m failing at this year) as well as that of the many survival bloggers out there.

If you want to truly understand the threat of cyberattack I couldn’t recommend Mr. Koppel’s book more. It’s an eye-opening look into a threat most American’s don’t even know exists but can and will change their lives for good in a split-second.

You, however, have the chance to prepare yourself now. Please take the opportunity to do so.