I was sent this Off Grid Tools Survival Axe with “31 features” in exchange for an honest review. And I told the representative that I’m not normally a fan of multi-use tools such as these… maybe I was wrong in this case. 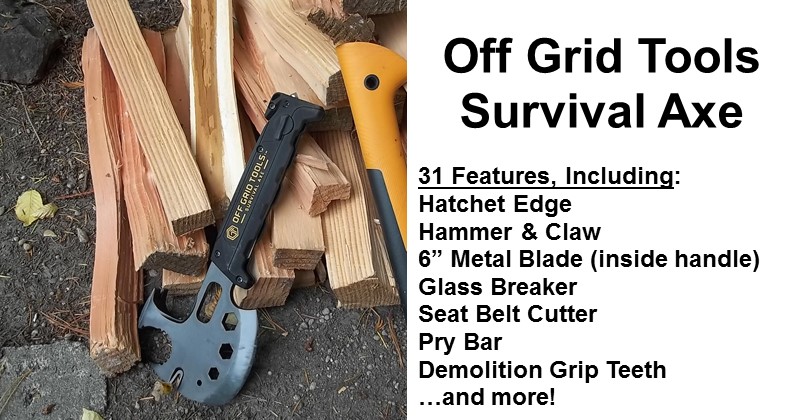 I do want to point out that I feel advertising a tool has “31 features” to make it sound more useful is a bit misleading. As an example, nine of those features are somehow split among four separately sized hex head sockets built into the axe head. To me that’s only four “features” to list. Other features pull double-duty too, but there’s no reason to point out every single one. In my opinion, the survival axe has about a dozen clearly unique “features” to name.

Now, I’ll get off my soapbox and onto the interesting and useful aspects of the tool…

For starters, the packaging is something I pay attention to. If a tool is packaged well then odds are that it’s going to be built well. And, in this case, even though it’s packaged in plastic, the survival axe is clearly packaged well:

And comes with an easy-to-use sheath (a must for safety): 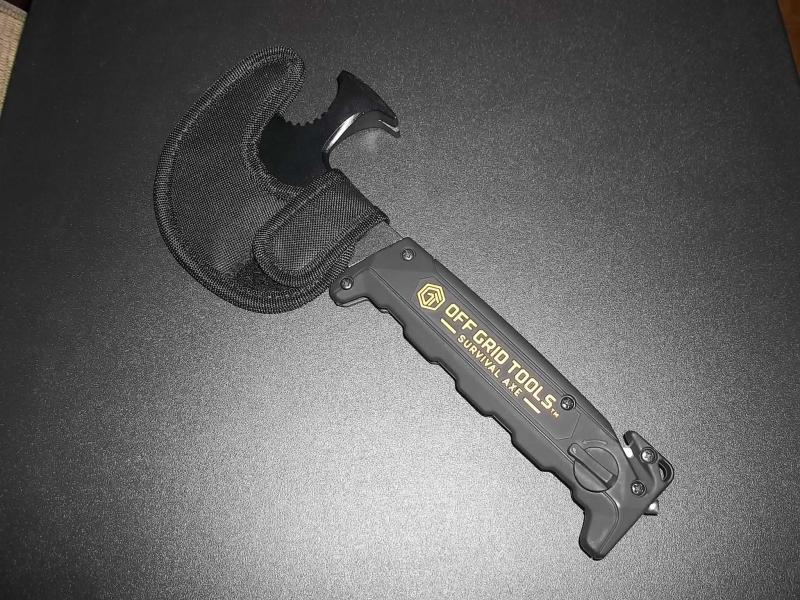 Inside the handle there’s a 6″ reciprocating saw blade that can be exposed by turning the small knob near the bottom of the handle: 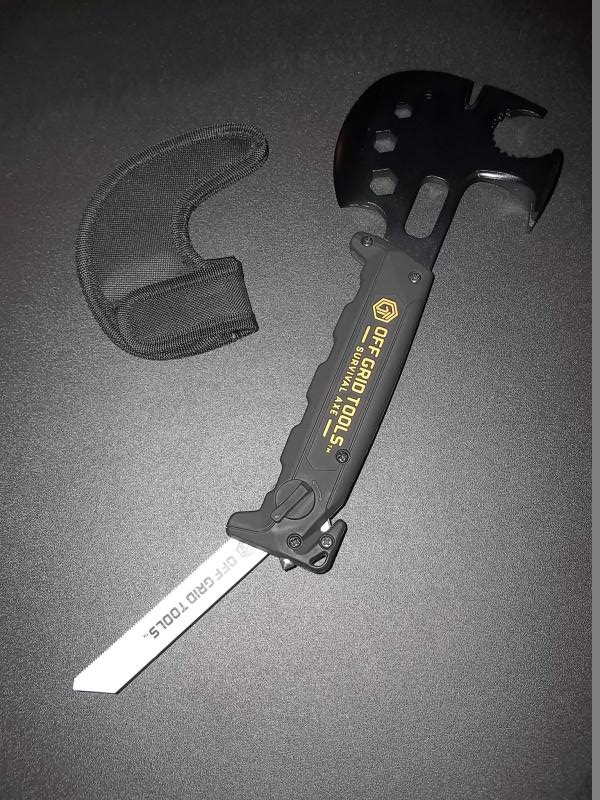 The blade locks into position when being used; just push the blade a bit to the side and it can be rotated back into the handle for storage. That’s nice.

Before even using the axe, I decided to take the five screws out of the handle because I thought the axe might include extra blades… it does not.

Of course, the first thing I wanted to try out was the axe. And, so, I decided to split a bit of kindling. As you can see below, the Off Grid Tools Survival Axe is sitting next to my trusty Fiskars Hatchet which is what I normally use for splitting kindling fast: 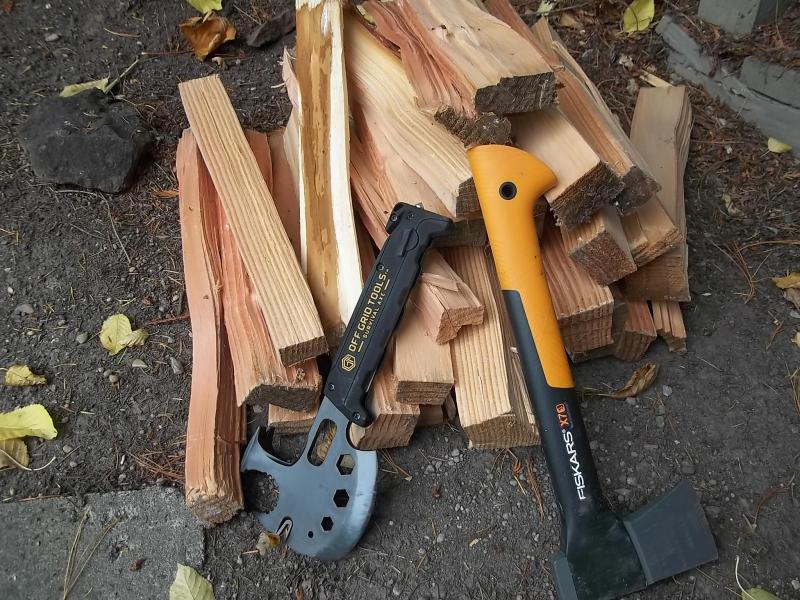 Surprisingly, the Survival Axe performed very well. The blade was sharp and split kindling easily; just as easily as my Fiskars. In addition, the hammer on the backside of the Survival Axe came in handy when I needed to use a mallet get the axe head through tough spots in the firewood. For this purpose, I was pleased.

The next thing I tried was to drive a few different nails into a board with the hammer feature, and it worked well enough:

I then used the hammer claw feature to remove the nails and it worked just fine for the nails closer to the board, though I needed a bit of leverage for the longer nail: 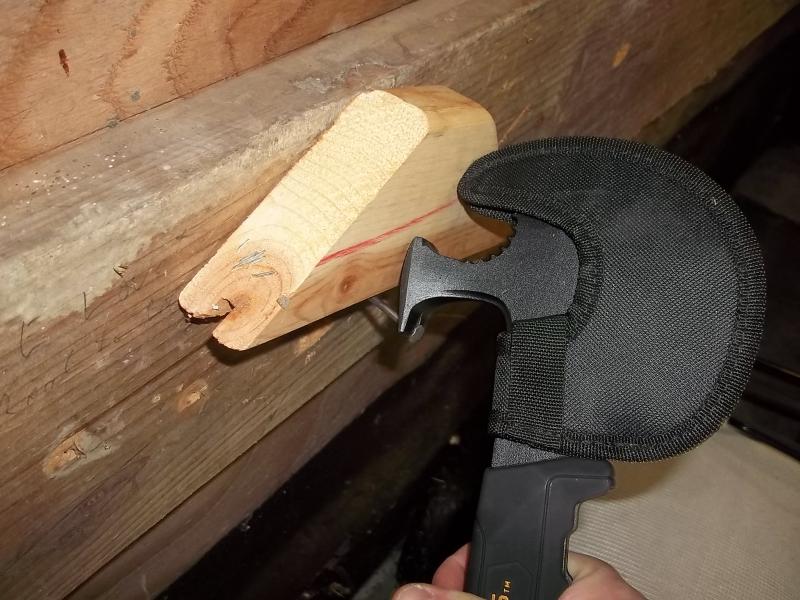 Overall, the hammer and nail puller / claw worked well enough. It’s no replacement for an actual hammer, but it will get the job done.

I then wondered about the saw. And, although, it’s a full 6″ in length, I’d say the saw blade is virtually useless. In fact, I spent a good 30 seconds just trying to cut the end of the 2″x4″ until I tired out after getting almost nowhere: 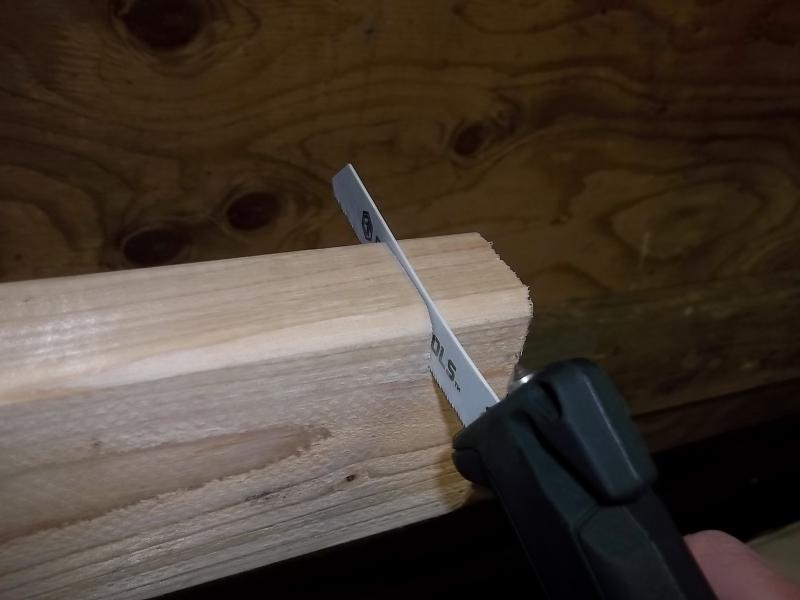 Clearly, the teeth on this blade are NOT meant for cutting wood, so, I tried to cut a piece of cooper pipe: 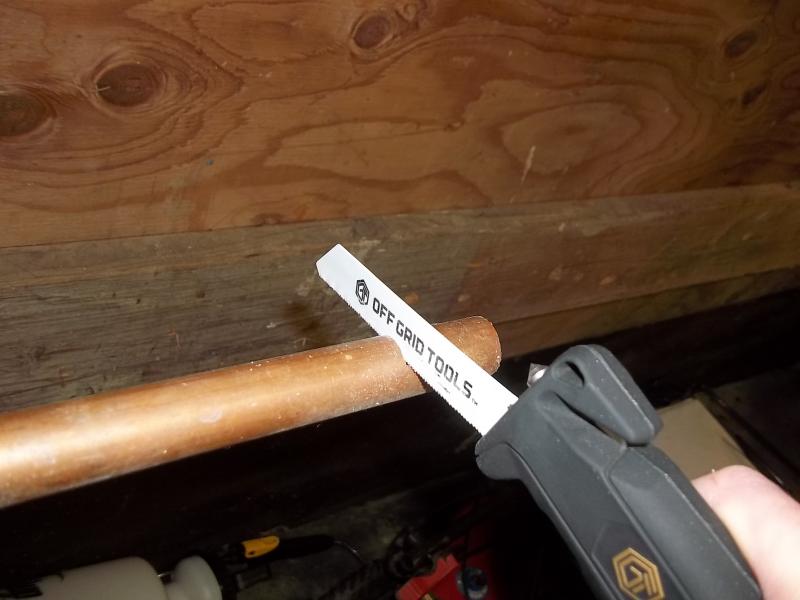 It works, though, I wouldn’t want to have to use it often at all. If you can replace the blade with more aggressive teeth, then I would say it’s useful for potential survival purposes. Fortunately, it appears to be a typical reciprocating saw blade which means it can be easily swapped out with a more aggressive teeth pattern.

Most of the other features I didn’t really try, such as the hex head sockets, pry bar, or spanner wrench. I did try the box cutter and was underwhelmed as it was in an odd position to be truly useful and, to be honest, didn’t do a good job even when I could position the survival axe correctly.

And, although I wasn’t able to try a few of the likely more useful survival features yet, I do like the fact that it includes a gas shut-off wrench (I assume it’s non-sparking), seat belt cutter, and glass breaker.

Ultimately, I’m fairly pleased with the Off Grid Tools Survival Axe. The main components of the tool are useful (though you should replace the saw blade), it’s clearly made solidly, and includes a handful of additional features that could prove useful in the right situations (e.g., the seat belt cutter and glass breaker).

If interested, here’s a video about the various features too (not made by me):