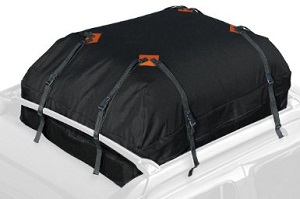 You know, not everybody has a large SUV, truck, or spacious RV in which to bug out. Some of us (me included) have only a lowly four door sedan with which to rely upon. Originally, our plan–or should I say “my” plan–had always included the use of two vehicles so that we could take our “extra” stuff but a while back we had to sell one car and, hence, were left with just one. So, what to do?

Well, there were options, including a trailer and cargo hitch and even trading in our car for a larger vehicle but we elected not to do so knowing that we were going to have to drive across country for our upcoming move (didn’t want to drive two cars) and because we would want multiple vehicles in Seattle… one of which would be our current vehicle. So, we’re making do for a while but didn’t want to be completely without options and, thus, we purchased a rooftop cargo bag that would not only double as additional vehicle bug out space but also help up in our move.

Now, there are both hard-shelled carriers and soft (cargo) bags. The hard-shelled carriers are better and work great for vehicles that have rooftop rails (such as SUVs) but we opted for a soft cargo bag because it worked better for our car. Unfortunately, this means we can’t put a lot of heavy items inside so that means we can’t load up the bag with buckets of rice and beans or ammo cans. It does, however, mean we can put extra luggage, assorted camping gears, maybe blankets, freeze dried foods, and other lightweight items.

Of course, I guess you *could* load up with heavier items if you had to but most vehicle rooftops aren’t designed to sustain hundreds of pounds of weight without caving, though, you might have a few very large dents for sure. Ultimately, you’re not going to add a ton of space with a rooftop carrier but it is a lot better than NOT having the option. And, fortunately, most canvas cargo bags are fairly inexpensive at between $40-80 on Amazon. Hard-shelled carriers are going to be a bit more expensive.

So, what do you think? I know it’s not the best of plans but when you have to make do, you gotta’ improvise!

3 replies on “Short on Space When Bugging Out in Your Vehicle? Add a Roof Carrier or Cargo Bag!”

You would need to put a receiver hitch on your car, but other than that, they will work with any kind of vehicle. The carrying capacity might be affected by the carrying ability of the vehicle of course. Check to see what kind of “hitch weight” your vehicle will handle. You should be able to find this out through a car dealer (for your car make).
But they are really good for large bulky lightweight items, and for carrying stuff like fuel, propane tanks, and the like, that you do not want to have inside the vehicle with you.
I used mine on the back of my 5th wheel camper once to carry a large grill and extra propane tanks, among other things. They are very versatile. And light enough for one person to mount and disconnect.

You might also consider one of those receiver hitch type carriers. I have one and it’s very useful! They will handle quite a bit of weight (average 500 pounds) and are easy to add on when needed. The prices start around $60.00 and go up from there. Check out this page for some ideas.
http://www.northerntool.com/shop/tools/NTESearch?escapeXml=false&ipp=24&storeId=6970&Ntt=receiver%2Bhitch%2Bcarrier

Very useful idea, Ron. But do they work with a sedan? Of course, I don’t have a hitch on my car either.