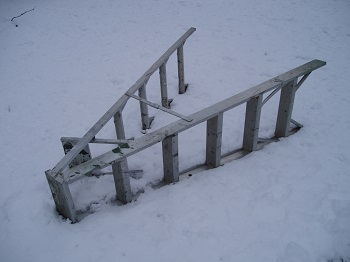 My neighbor, when we still lived in Missouri, fell off his ladder and broke his wrist trying to put up Christmas lights. I don’t know how he’s doing now but I assume his wrist is still healing, though, it’s been nearly a month now.

I bring this up because broken bones are one of those things that I just don’t understand when it comes to first aid and I firmly believe will be a much bigger problem than most of us have considered in a post-shtf world.

These days if we get a broken bone we rush to the emergency room (or the family doctor), he or she x-rays it, chastises you for having been on the ladder in the first place, and then proceeds to put a really annoying plaster cast on you and tells you to use a pen it scratch it when thing itch.

Ok, that’s great, but doctors may be hard to come by in a lengthy emergency, x-ray machines will be even more non-existent, and plaster casts just need to disappear anyway. 😉

The question, therefore, is: what would you do if you had a broken bone in an shtf world?

Perhaps the best you can do is to ice the swelling for a bit, split the break as best as you can, and then hope for the best. After all, that’s what I would do but what about those funny areas such as the wrist or ankle where lots of things seem to come together and where you could easily have more than one broken bone?

Again, I guess it’s just a “hope for the best” scenario but to think that the lack of appropriate medical care with something as seemingly simple as a broken bone could cause you all sorts of problems on down the road, well, that sucks!

What if the injury isn’t a broken bone but a sprain or strain? Here the best you can do is to apply the R.I.C.E.S. (rest, ice, compression, elevation, splint) acronym which is about all a doctor would tell you to do, so that’s an easier scenario. 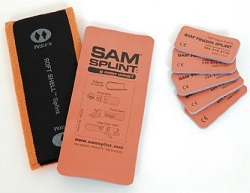 Now, I do have some SAM splints for emergency use (pictured left) but I’ve always seen them as more of a temporary stop-gap solution rather than as a permanent fix. Note: they also make longer 36″ SAM splint rolls for larger applications.

Regardless, I think you would still need to reinforce a SAM splint if you’re going to use it long term because they’re far too pliable to be a permanent solution.

And, of course, you could makeshift something from whatever you have around the house but I’d prefer to have something I could quickly and easily apply.

I also briefly thought about using plaster of pairs as a more permanent cast option but I’m not sure if that’s the same stuff they use in doctor’s offices or not and I don’t know about the long term effects of skin contact. I know we used the stuff once or twice to make belly casts when my wife was pregnant so many years ago… not quite sure what ever happened to those casts but I do remember they stayed formed for years! 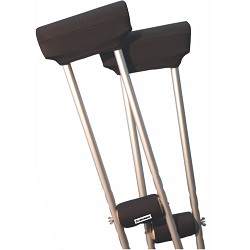 I might also suggest a pair of adult crutches (pictured right) because there’s a very good chance that something broken–or even sprained or strained–will be on your lower body. As such, you’re going to want to be able to get off your feet.

And though I’d imagine you could makeshift something to get you around if you had to, wandering around on anything that’s not super-comfortable for weeks on end doesn’t sound like much fun to me!

An investment of just $30 could be well worth it.

What about wheelchairs? Well, not so much unless there’s a very good reason for you to already have one.

There are no doubt a wide assortment of other braces and padding that can help with sprains and strains and other problems like this but I do want you to consider what and how you would deal with more pressing problems like broken bones, especially when no proper medical help is available.

I’d say take first aid classes, but the last tkme I went to getca re-cert, they said they don’t teach how to set breaks now. And don’t recommend it. When I asked, I was told that it was because the hospital could do a better job. There was no reply when I asked about being out away from ‘civilization’, which is where I usually am when things like that happen. lol I pray that this is nog the norm for most beginning first aid classes in that or other organizations. But I highly recommend taking first aid (and advanced if necessary) training, whether for post apocalypse settings or real life. Why stand around worrying about even minor disasters, when you can be pro-active, right? 🙂

Instead of a wheelchair one could easily roll themselves or be rolled around by others upon a wheeled office chair. These are readily available and relatively inexpensive.

As for the fractures, they present their own type of problems. However, there are some types of simple breaks that even today are merely wrapped with an elastic bandage and babied until they heal such as broken ribs and broken toes. Painful yes but they can be dealt with easily enough if they are simple rather than compound fractures.

True that some breaks aren’t too serious but it’s more the breaks like around wrists and ankles that I think will cause the most long term troubles when appropriate medical care isn’t available. Thanks for your thoughts, Marilyn!