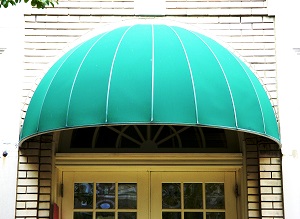 This summer I’ve become obsessed with awnings and canopies. Specifically, I’ve become obsessed with anything I can find and use to shade myself from the relentless summer heat. I do so not only because I can but also because I realize that the simple act of shading is going to be about the easiest action that I’m able to take when it comes to keeping comfortable post-SHTF.

Regrettably, we have become far too reliant on power-hungry HVAC systems to keep us happy and it will be a rude awakening when the time comes that we can no longer rely on them to keep us cool. In fact, I once looked into the cost of a solar or wind-powered system that would be big enough to power a typical HVAC unit and furnace and, believe it or not, I would have been better off moving and building an underground house!

It wasn’t that long ago when window shades, awnings, and covered porches were the norm because they understood that keeping the sun out of the house and off the person was the most efficient way to keep cool… and likely because they didn’t have power-hungry HVAC systems.

While you could certainly purchase pre-made window awnings, patio awnings, and stand-alone canopies, they can get very expensive very fast! I prefer the makeshift approach…

Thus far this summer I’ve experimented with using all sorts of supplies to shade myself, our windows, a part of the deck, and even parts of the garden, including tarps and even bed linens. I’ve tried other things that didn’t work so well, such as plastic sheeting that was too difficult to secure because it simply tore apart.

You really need something larger to work with and preferably something that is meant to be secured such as a tarp with eyelets; I’m a huge fan of tarps and suggest you have several or more on-hand in a variety of sizes. As I mentioned, I did used some old bed sheets but had a similar problem to using plastic sheeting in that once you put a hole in it they have a tendency to rip or tear. I wound up solving this problem by using two small pieces of PVC fittings that essentially created a makeshift eyelet while trapping the frayed edges of the bedsheets I used. I would assume you could do the same with plastic sheeting but I’ve yet to try it again. Regardless, tarps are the way to go here, if you ask me.

You could get elaborate and erect a structure to attach such makeshift shading to such as recreating a stand-alone canopy if you like. In addition, you could create your own window shades relatively easily by attaching a tarp with few screws to the side of your house, then use two supports (such as 2×4’s) to extend the tarp out beyond the window a few feet, and finally tie it all down like you would a tent to the ground. I’ve also considered multiple layers of shading over windows though haven’t tried it. I’m not entirely sure why I think multiple layers would work better but it may be worth further investigation.

I would assume most anything can be used as an awning if you like, from sewn-together clothing (not sure why you would want to do this) to an pool cover or even old carpeting or linoleum, for that matter. The point is to experiment whenever and wherever you can. You could wind up with a giant mess or an actual success. In fact, the knowledge you gain could prove invaluable in the future and mean the difference between relative comfort or not.

2 replies on “Utilize Awnings and Canopies to Beat the Summer Heat, Now And Post-SHTF”

Regarding braces or things to use for shading,PVC piping is the way to go. You can make about anything you can think of from it using a can pvc glue and a hacksaw!! Maybe it would work better to roll up in the ends of plastic or whatever you are working with than eyelets? If you need it to be more rigid ,ask for schedule 40 , it’s thicker walled. You could even build a hammock with it. Hope this helps, I’m building a stand for my fresnel lense out of it. Doug…….

Hadn’t thought about rolling up the ends… will have to try that! Thank you.