Last week we had some heavy winds roll through the Pacific Northwest where I live and, as a result, we had a tree branch break free and contact a power line. You can probably see the branch on fire but not the power line it’s touching: 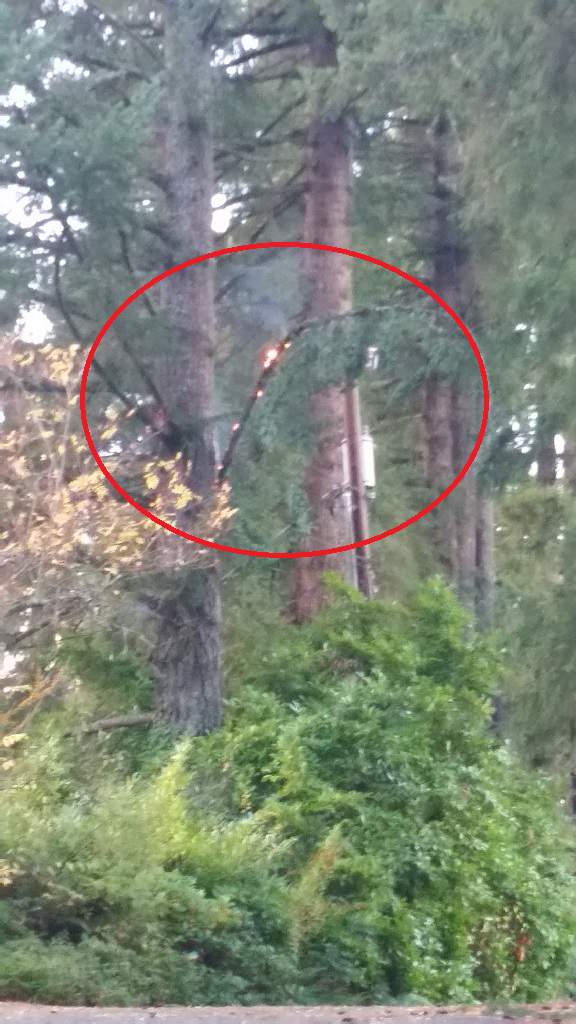 Well, we called the fire department and they came out, but only stayed for several minutes before running off to deal with more pressing matters. Apparently this is normal for them when major wind storms hit the area.

Anyway, I wanted to point out that if it ever did cross your mind to grab a garden hose and try to put the fire out that it would be a VERY bad idea!

That’s because water and live power lines simply do NOT mix… you’ll likely be electrocuted trying to put out the fire.

Ultimately, the fire died out on it’s own and eventually the local power company came out and cut down the offending branch so no big deal, but it was alarming to see.

I made it a point to make this a teaching moment for my kids as well because who knows what they may try to do in the moment… and I’m reminding you as well.

Be safe out there.

Thanks for a very useful lesson /reminder. How easy it would be to make a terrible and fatal mistake at a time like that when obviously there would be a worry about fire spreading.
How about some safety tips for cutting up trees that have blown down. How many people realise that if the tree roots are still in the ground that when cutting off branches you can reach a ‘tipping point’ and the tree can quite quickly snap back upright again ?. Nasty if you’re in the middle of chainsawing!
And even worse if children are playing at the roots end. Keep writing!