I’ve been wanting to buy security cameras for years, but I always put it off because I figured the good ones cost too much, I probably had to run wires somehow, and we rent so I didn’t want to install anything permanent. That’s what I thought until I decided to really look into wireless cameras. Ultimately, I settled on this Blink XT camera system several months ago and I can say that I’m quite happy with them, here’s why…

For starters, they don’t cost much at all. The five camera system I purchased was around $349. That said, I had to buy a second Blink sync module (more on that later) as well as two sync outlet mounts for $8 each which I didn’t actually have to purchase, they just ensured the sync module was a bit more secure when installed in an outlet: 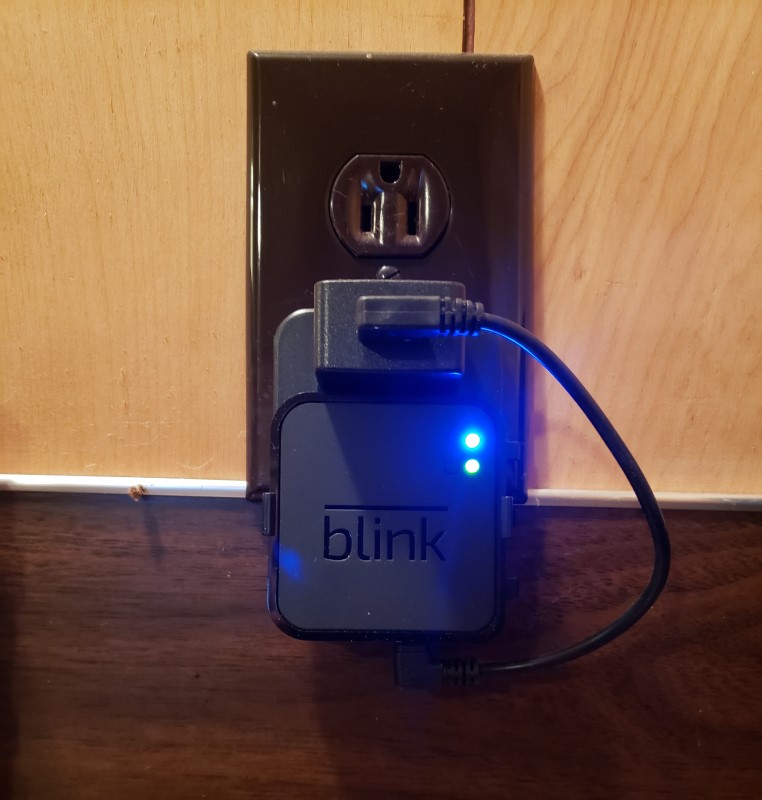 So, for a bit more than $400 I was able to get everything I needed to completely cover the entire front of the house, including the driveway, front door, backyard, side yard, and the detached garage. Perhaps I could have covered a few other angles of the house more thoroughly if I wanted to purchase more cameras (each single camera can be had for under $100 each and even less if you watch for sales) but, ultimately, these five cameras covered the important areas I was concerned about.

Beyond that, the cameras are waterproof so they can be used outside (there are Blink systems for use indoors instead which are not waterproof), are motion-activated, have night vision, and run on two Lithium batteries which, according to the manufacturer, can run for two years with average use. I’d say this is generally true, however, I did recently have to replace the front door camera batteries after only several months, but I expected this because I leave that camera running 24/7 and it records dozens of five-second clips each day. Clearly, it wasn’t going to last two full years at that rate.

They also offer free Cloud storage of your video clips too. They’ll store the video clips from all cameras up to a certain amount of data used. Thus far we’ve never hit that limit yet when set to store clips for 30 days (you can chose up to 1 year or fewer than 30 days, if you like). For example, as I write this we’ve used 55% of our allotted storage limit and that’s easily with hundreds of clips stored over the past month: 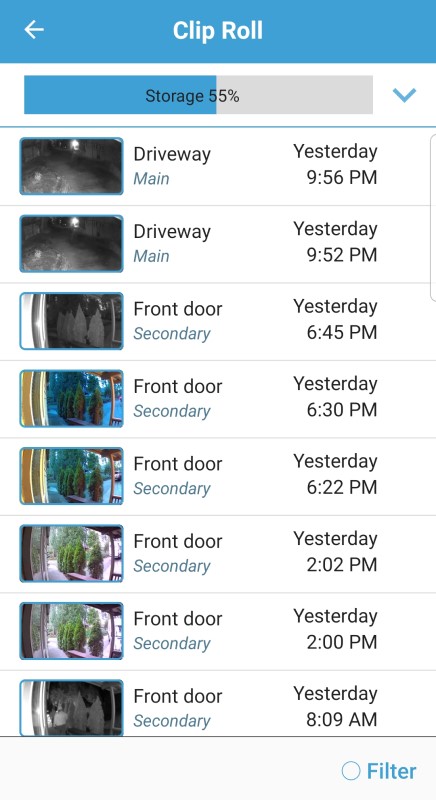 I know they offer you a paid upgrade but, in my experience, there’s no point. Perhaps if you chose to store much longer clips–say, 30 seconds instead of the default 5 seconds–and you chose to run them nonstop then you’re probably going to run out of storage space and, like I said before, you’re going to have to replace batteries more often as well. Honestly, though, a pack of 12 Lithium batteries doesn’t cost much, so you could easily replace the batteries once or twice a year and not break the bank, yet still record all day long… but that depends on your activity level and preferences.

Setup was pretty easy too. You just need to install their app, connect the Blink Sync module to your Wi-Fi connection, install the cameras where you want them, and you’re done. Here’s a setup video that walks you through the initial app and module setup (skip to about the 7:40 mark to get to the installation portion, if you’re in a hurry):

Really, it’s not hard to setup whatsoever. While I’m thinking about it, there was one aspect he pointed out in the above video about switching off the camera light which indicates it’s recording when installing the batteries. Personally, I chose to turn off the recording notification light because I didn’t want to alert people to the camera being there since most of them are obscure enough to avoid notice unless someone is really looking and by then it would be too late. Here’s an example of the camera attached to my garage which is relatively unnoticed since the camera is black and installed on the dark trim; step back a bit and you’ll never even notice it’s there: 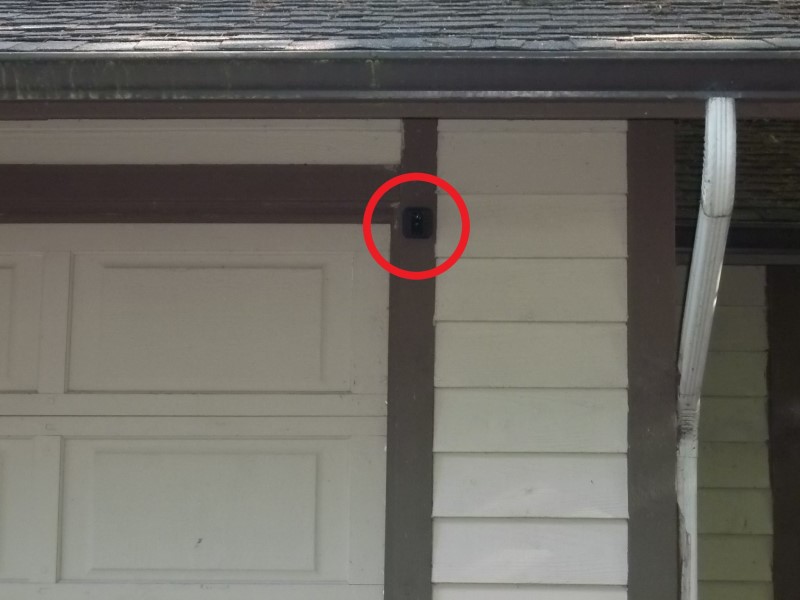 Most of the cameras settings inside the app are self-explanatory and I didn’t bother to change most of them, although, I did chose to increase most camera’s “Sensitivity” setting from the default 5 to 7 to get them to begin recording a bit faster. They say if you have tree limbs that might blow around in the wind a lot that you will get false alarms which I’ve found to be true. As such, one camera (the one in our backyard) I left the “Sensitivity” at 5 because of too many false alarms.

I played around early on with changing the clip length from the default 5 seconds to something longer, but I found that five seconds is good enough for our purposes. I also chose to reduce the “Retrigger time” from 30 seconds to something shorter (20 seconds) on our driveway camera because there are times I noticed that it triggered initially but then didn’t retrigger fast enough to my liking.

There are plenty of other settings you can certainly change, if you like, such as video quality, disabling the microphone (I’d leave it on), adjusting night vision, and adjusting activity zones which is something else that I updated on a few cameras. For instance, on our front door camera, I disabled some of the active zones (they’re grayed out in the photo below) because I noticed that glare from headlights bouncing off the window would occasionally cause the camera to record as indicated in the warning below the camera view in the following screenshot: 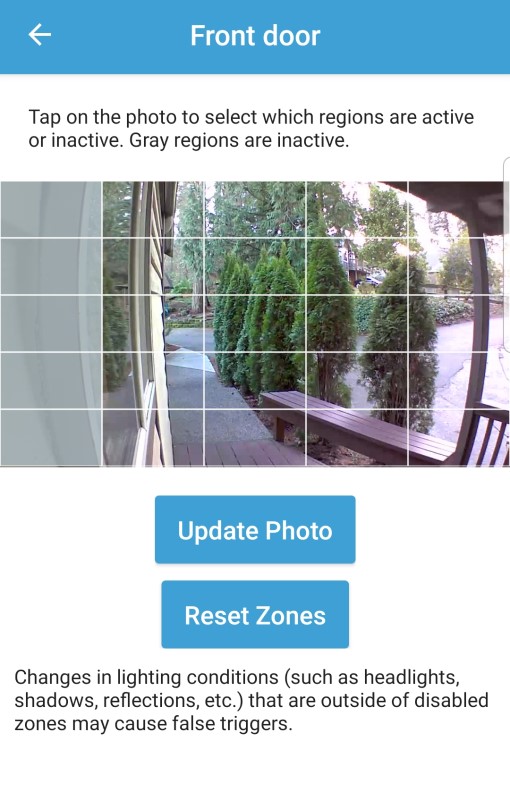 The question now is: how good do they record? Well, here’s a clip from the other day of the Fed Ex van driving by the front door camera on the way to our neighbors:

The video quality for all cameras are set to “Best” but I could’ve chosen “Enhanced” to get even better quality or “Saver” to limit space usage, but you’ll also reduce image quality. From my experience, “Best” seems to work just fine as it’s clear enough, but don’t expect faces to be movie-quality no matter which option you chose.

What about the difference between day and night? Here’s two videos from our side yard camera of the local cat walking to the water which sets off the camera most nights:

And the night vision video:

The night vision images aren’t the best, I’ll admit. I tried changing some settings specific to nighttime recording, but I’ve yet to find a combination that I’m truly happy with. Interestingly, how good the recording is also depends on whether the camera is relying entirely on it’s internal components or if there’s external lighting and whether that lighting is pointing at the camera while recording or not. Here’s an example of my eldest child walking to his car one night a while back with the house motion lights having been activated:

I’ve also noticed that the cameras are a bit slower to record motion at night, at least, that’s what it seems like to me. Adjusting the “Sensitivity” to be even higher seems to be a bit too much, though, as even the slightest breeze tends to set off the cameras at a 9 or 10 sensitivity. Again, you’ll have to adjust to your needs.

Remember earlier that I said I needed two Sync modules? Well, each camera needs to be connected to a Blink Sync module to work, and because we have cameras that stretch from one end of the house to the other–especially the one mounted to the detached garage which is the farthest away–the Wi-Fi signal doesn’t stretch that far and creates a weak connection with only one Sync module no matter where I placed it in the house. To fix this I simply had to add a second Sync module; one roughly on each side of the house.

This isn’t a huge deal (though it did cost me an extra $50 I didn’t want to spend on a second module) and it is slightly annoying because the second module is treated an an entirely different system, meaning that I have three cameras attached to one Sync module and two attached to the other. Over time, however, I’ve learned that having two Sync modules has actually worked out better for me because I chose to keep the front door camera system armed 24/7 and I put the other system on a schedule to turn on/off at certain times.

There have a been a few times where the Blink system has gone offline or had difficulty uploading a video clip. Give it a few minutes and things seem to return to normal. I’m really only aware that anything is wrong because, happily, the app sends me notifications of anything that went wrong–such as video upload problems or high battery usage–as well as notifications of new videos clips having been recorded.

Overall, I’m quite pleased with the system for the price I paid. It’s quick to install, easy to use, didn’t cost a lot, and rarely has a problem. I’d prefer the video quality were a bit better, particularly at night, but most of the small annoyances can be easily remedied with some tweaks in the app.

And did you know they now have the Blink XT2 Camera System? The newer system offers two-way audio and is priced similarly to the original XT system. Oh, and both work with Alexa if you’ve got one.

Even if you’re not looking for an awesome last-minute Christmas gift, the Blink camera system is a great home security measure any good homeowner should have. After all, it’s one of the most useful of my 28 powerful home security solutions I offer in my book.

This is such a great review. I was planning to buy a security camera for our house and thought about having Blink XT or XT2. Cheers!

Wireless security is better than nothing however by it’s design..Any reasonably competent adversary can render it useless. Combination Security.. Wired and Wireless which independently secure a facility or home are far more reliable.

I would really like to read this article but I can’t because a pop up for your book covers about a third of the page on the right side. No way to close it.

Sorry about that! I thought I fixed this the other day, apparently not. I’ll try again, thanks.