First, let me state that I’m not a big fan of using candles for much of anything during an emergency situation. I think they’re a significant fire hazard especially after a disaster when people do dumb things… possibly like this. There are better, safer ways to light up the night and cook food during an emergency.

That said, a week or so ago I read this post that Bev at SeasonedCitizenPrepper.com put up about makeshifting a tea light-powered oven with an old toaster oven. Well, since I happen to have a toaster oven I figured I would give it a shot myself. Here’s what happened (click images to enlarge and follow along below)…

As for the bread? It didn’t turn out half bad after I cooked it an additional 20 minutes (beyond the called for one hour) in the big oven at 350… and cut off the burned bottom… and a bit of the sides! I should note that it was a big lopsided but it all went down the same as far as I was concerned.

What about you? Even try a candle-powered oven before? 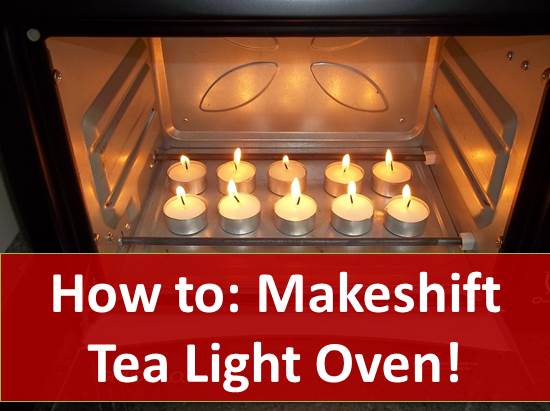 7 replies on “How to Makeshift a Candle-Powered Tea Light Oven!”

I will let you know how it goes.

I can not wait to try this. I am going to try this tonight. Well people please wish me luck.
Thank you,
Lindsey

It does work. Best to get an inexpensive (thrift store, used, or sale toaster) and remove heating elements, plug, plastic interior parts, etc., drill many holes in back, and attach baking brick with inexpensive clasps from depot shop. The brick will help hold heat. Also, yes, bigger is better in toaster oven size, especially if you want to try roasting big meats. Also, for safety, all tea candles are different, but they do have a flash point usually above 450 degrees, so try to stay below that temp. Since they are all very inexpensive, try different versions to find your sweet spot. Thanks for the article and good luck to you.

What happened? The blog i read said to drill holes in back and drill clips in to hold a baking brick to toaster over than use tea candles.im making one tomorrow.

Mona, my post about making a tea light oven was to use our toaster oven. Because of that I wasn’t going to ruin it by drilling holes or otherwise modifying it. Of course, if this were a SHTF situation then I would definitely modify my toaster oven in any way that I felt necessary to make this work and be safe.

I know more than I ever thought I would about tea light candles as I have been burning them ((over 5900) the last 6 months. Testing and retesting, adjusting and readjusting and you can see some amazing bread cooked per the recipe if you click the banner up and to the left that says HERC oven! If anyone really wants to know what is happening to the DIY tea light candle ovens, I went into great detail on Busy B Homemakers blog site. It’s all there. No secrets. I don’t want anyone to get hurt.

Kris,
I read your article about making a tea candle over a few years ago and am now ready, but the article and Busy B Homemakers website have vanished. Is there any where on the Internet that you know of, where I can again read the article and see the pictures? Thanks,