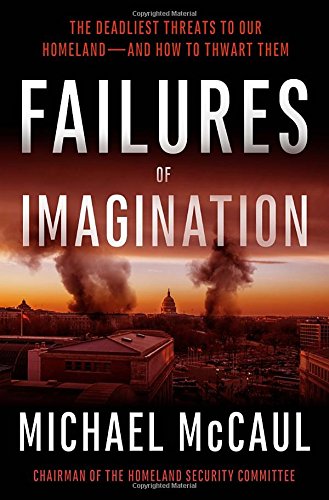 I was recently sent this book to review written by Congressman Michael McCaul titled Failures of Imagination: The Deadliest Threats to Our Homeland – And How to Thwart Them and I must, this was a good book!

Congressman McCaul also happens to be the Chairman of the House Homeland Security Committee and is, therefore, someone we should pay close attention to.

In fact, the author had a very interesting writing style and one that I appreciated quite a bit. That is, rather than being a good, yet monotone discussion of terrorism such as with the book Lights Out: A Cyberattack, A Nation Unprepared  by Ted Koppel that I recently read, this particular book was written to both entertain and educate and do so in a very unique way.

In fact, the author wrote the book as if it were eight separate short stories which kept the book fresh. Each chapter dealt with a new potential terrorist threat, from dirty bombs to mall shootings and more, I was intrigued with each turn of the page.

You see, Congressman McCaul starts each chapter as if it were a novel, delving right into the heart of the story and working right up to the specific attack considered. He often does so from several different perspectives, that is, from the terrorists themselves to those affected by the attack.

After the scenario presented, he provides an “After-Action Report to the President” which summarizes the aftermath of each attack, usually within a few pages, explaining what happened, how authorities believe the attack was carried out, death tolls, damages, and so on.

But he’s not done…

What really makes the book stand out, in my opinion, is that he then goes on to discuss if this particular scenario could actually happen and, regrettably, he makes a very compelling case as to precisely how and why each attack could happen citing real world evidence and examples… it’s a truly chilling and sobering reminder that we are, no doubt, still at war and will be for decades to come.

Last, each chapter then discusses from a high level perspective what we can do to stop such an attack. Obviously, he doesn’t go into the minutia but offers several suggestions and recommendations regarding White House policy changes among other fixes we can and should make as a nation.

All in all, the book was good and, if I do say so myself, if his career ever goes belly-up in Congress he sure has a potential career as a novelist.

So, what does each chapter cover?

Chapter 1 – Unfinished Business: A Decapitation Strike at the U.S. Capitol

Chapter 4 – Black Friday: Massacre at the Mall of America

Chapter 6 – The Threat We Can’t See: Bioterror in the Magic Kingdom

Chapter 7 – Final Approach: Terror in the Skies of Los Angeles on Oscar Night

I won’t spoil the details of each chapter as you can get the idea reading each title; suffice it to say that six of the eight plots are focused on Islamic terrorism whereas the other two are plots from China and Russia.

The book actually made these terrorist threats real again and gave me a few more things to worry about at night. 🙁 Of course, it also offers hope… hope that we can thwart these threats to our great nation with vigilance and determination.

If you’re looking for an entertaining read covering real-world threats, this book is a good one.

As for the giveaway, if you’re interested in my hardcopy, please leave a useful comment below and after a few days I’ll randomly pick a winner. I’ll contact the winner by email and give them a day or two to respond… if I don’t hear back I’ll pick a new winner until I do get a response.

18 replies on “(Giveaway) Failures of Imagination: “The Deadliest Threats to Our Homeland” Book Review”

Sounds very interesting. Waiting to read it and others like “lights out.” Just re-read “one second after.” It scared me worse this time compared to before.

My personal terror scenario fear is a bunch of suicide bombers randomly picking churches on a Sunday morning. Very easy to do it at same time.

Scary thought about the churches. But I, for one, will not let them change my habits.

Even if I don’t win, I’ll probably buy this book.

Sounds like an exciting book and the cover looks good too! I´m sure this is that kind of book that makes me really think and see things differently.

“Last, each chapter then discusses from a high level perspective what we can do to stop such an attack. Obviously, he doesn’t go into the minutia but offers several suggestions and recommendations regarding White House policy changes among other fixes we can and should make as a nation.”
“Of course, it also offers hope… hope that we can thwart these threats to our great nation with vigilance and determination.”
I know, I’m always the ‘Negative Nancy’. Cole Wilson hit the nail on the head. Even if we managed to get a level-headed, strong willed, yet to be purchased president in the next lottery, the groupies in congress who are totally controlled by big bucks on K Street are not going to allow anything to change. Except stronger enforcement of the Patriot Act.
I would say we need divine intervention but I think that’s why we are in this fix.

I didn’t see any instructions on how to enter the giveaway.Guess entry is by entering a comment. Due to the fact that the world, and this country is in such a big mess is reason enough to read this book. I would be wary of propaganda since he is with homeland security. I would like to read this book.

If it can be imagined, it can be done. I’ve read several similar books, some mentioned here, so it would be good to get the perspective from an individual on the inside and with the facts. As an elected official myself, a first responder and also engaged in local homeland security planning, this would be a good addition to my own knowledge base. A complimentary copy would be welcomed and appreciated, and the knowledge gained would be applied with certainty.

These are all pretty high tech methods of destroying America. By applying Occam’s Razor, I can imagine a more low tech means of bringing America to its knees. If I were an influential Muslim leader in a place such as a Detroit mosque where there is ample grounds for recruiting followers, I could set my plan into action. I would begin with a small group, lay out my plan and set a date and time for it to occur. My followers will spread the plan by word-of-mouth to other trusted followers, to other mosques, cities, and across the nation.

The plan is to buy high powered rifles and steel jacketed rounds. The date is 24 December 2016. The time is after sunset on the west coast. Followers will simply watch CNN News for 6 PM PST. At that time they will simultaneously attack the nearest sub-station.

I’ll be happy to list all the benefits and potential pitfalls of this plan if you give me your copy of “Failures of Imagination.”

Thanks for all you do.

Love to win this book Thanks so much for your time

Thank you for all your posts. I have to say, I am in an unusual position in that I have the opportunity to teach. So, I am not only teaching myself and preparing I pass that information on to my students. I teach them to see beyond the pages and think about what can happen and how they must become active citizens. I would love to read your copy and then file it in our school library for like minded “gifted students” who do have the ability to make a difference in our future but if that does not happen I will go to the library and certainly become more knowledgeable so that I may share newfound knowledge with students around me. Find Peace, and keep up the good work of informing, teaching, and sharing. Blessings,

It seems almost everyone wants to have opinions on these subjects but this is a book from a man who is dealing with facts. His view would definitely add to ones understanding of the methodology used to strike as well as viable strategy to defend against these acts of terrorism.
I can’t imagine the amount of raw data that Mr McCaul has access to, and the staff to pour thru it. It would be helpful in being preparedness minded to read a book such as this.

I wish more people would read books like this. I continue to get dismissive comments from people who don’t understand the need to do at least minimal prepping. Looking forward to reading this book. Thanks for your work Damian.

I also get dismissive comments, but I find that as I continue to prep and talk about what is coming, and they see some of the things I’ve been discussing coming to pass, a few are starting to wake up.

I have just finished the book and agree with the author except for blaming the President on just about everything congress has not produced a bill yet on our so called war on terror so we wait for one of the attacks to happen and then the finger pointing to begin so why not introduce a bill congressman Michael McCaul you are now getting the spotlight like so go with it.

This is a different world that we live in from when I grew up in the 1940’s during WW11. America faces many threats that our citizens ignore and are unprepared for what is coming at our Country. Time to wake up Sheeple before we lose our Country.

“Failure of imagination” appears to be a must read. Reading “One Second After” concerning EMP and is very informative and frightening at the same time. I think i am prepared on so many levels, but i can see i have a long way to go.

I am waiting to read Ted Koppel’s book…sitting by my bed. I would love to add this one to my nighttime reading. Makes for great discussions with my other half– I share the highlights!!